Die Ladenhüter (“Just Because They Serve You…”) 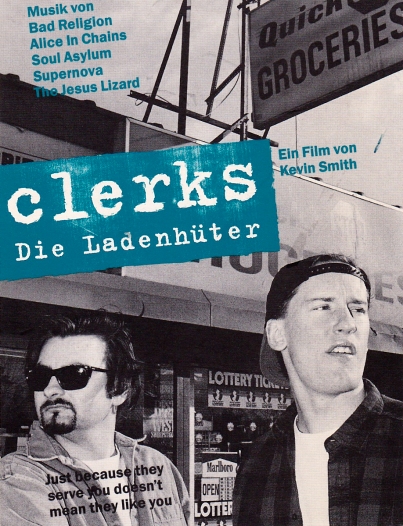 I’m not at Sundance.  You’re probably not either.  There are more than 120 feature films, mostly new, dispersed through various festival sections, and many of them will become must-sees of 2014.

But Kevin Smith’s first film, “Clerks,” a new print made for its 20th anniversary, screening in the section, “From the Collection,” is one of those classics that’s referenced when what is remembered as authentic, truly indie about the festival and independent film in general, is wistfully discussed.  From the glory “back in the day” days.

Smith, a film school dropout, whose budget and method of funding “Clerks” is legend ($27,575 raised from maxing out 10 credit cards, a bit of family help and selling his comic book collection), has promised that he will shoot “Clerks III” in May and have it in theaters in November.  And burning up the internet (at least that subset populated by “Clerks” geeks) is the news the Rosario Dawson will reprise her role as Dante’s girlfriend.

“Clerks” launched Smith’s career and his second film, “Mallrats,” made for a Hollywood studio, put it on life support, to be resuscitated by his next, the wonderful “Chasing Amy.”

Funny, friendly and totally accommodating, Kevin let me take over his small office in Red Bank, NJ (near the church where Eileen–whose friend was Smith’s accountant–got married), to set up a makeshift studio and shoot him both as “himself” and as “Hollywood Kevin” for a Village Voice film supplement cover and an article by critic Amy Taubin, headlined, if I remember correctly (searching the Voice’s archives yields nothing), “What Does Independence Got to Do With It?” 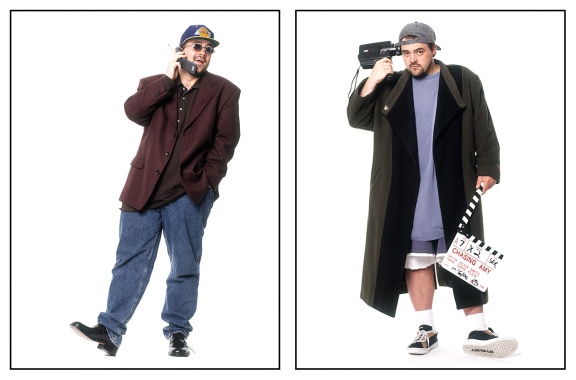 And I shot the poster for the German release of “Clerks,” (“Die Ladenhüter”) for the German distributor.  My assistant, the groomer and I, all film-obsessed, were thrilled to shoot at the convenice store that Smith had made famous, the actual Quick Stop in Leonardo, NJ.

Brian O’Halloran (Dante) and Jeff Anderson (Randal), so much fun to work with, got into character readily but wardrobe more reluctantly.  “Clerks” takes place in warm enough weather and we shot outside in January.  Of course, after we wrapped we all went into the Quick Stop for some truly mediocre coffee.

“Clerks” will screen at 11:59 pm on Friday, January 24, at the Egyptian Theatre in Park City.  Kevin Smith is expected to introduce the film and participate in a Q&A.